We have another custom Stinson V-77 project again that is well underway. This particular aircraft was flown home one year ago on a ferry permit. The aircraft was previously restored in the early seventies and had been out of license for several years. It had been properly stored in a climate controlled hangar and required minimal attention to get it airworthy for the trip home. However, the engine had last been overhauled in 1967 and the rest of the aircraft was in need of attention having tired fabric and from the best we could tell, three layers of different paint jobs. The most redeeming qualities of this project are; the airframe is a zero damage, low time and in immaculate condition. It is complete and  was already converted to 450 hp on a previous modification. With the 450 installation we nickname the aircraft as a “Super-77” although once complete we brand it as a “Gullwing Stinson” which with its distinctive lines and massive ramp presence it is most commonly called by all. Photo from the ferry flight home in December of 2014.

After a fairly uneventful trip home this beast awaited its turn in the shop project queue. We began work in September of 2015. This job is a complete remanufacture taking the aircraft down as far as possible. Although the aircraft was previously converted to 450 hp from its original Lycoming 300hp power plant, it was done with what I’ll call a field work consciousness with more of a utilitarian level of workmanship. In addition little else was accomplished to customize the aircraft and what previous “restoration” work that was accomplished was done so with a different consciousness than applied today. When previously “restored” this aircraft was only about 27 or less years old. So many “restorations” of the late sixties and early seventies were merely a recover, repaint and panel upgrade. Now we are talking about a 72 year old aircraft. If the job is going to get done correctly, it’s approached with a completely different set of criteria, which is why we apply the term remanufacture. The process becomes so extensive the traditional consciousness of restoration must be abandoned and you apply yourself in a manner that puts the aircraft in the starting blocks to be fresh platform for another seventy years of service. Once the fuselage is stripped of all sub assemblies and hardware, the inspection process begins. We extensively inspect and test all areas of the fuselage. This is also the point we add a passenger door, passenger door ladder to match the left side, arm rest pedestals, full controls for the co-pilot including brakes,  and improved battery mounting. During this process numerous sub assemblies are being gone through and slated for replacement or repair. Passenger door being added to right side of fuselage.

Once completely inspected the fuselage is sandblasted, inspected a second time and then powder coated. The fuselage is as perfect as new and ready to begin receiving fresh hardware and sub assemblies. All new control cables, pulleys, bearings and hardware are currently being installed. Numerous stringer bulkheads have been repaired or made new with all new stringers being used. A new instrument panel was made to replace the old chopped up one. The cockpit controls have all been gone through and made new including fresh cadmium plating. Below is a gallery of some of this particular work being accomplished. When browsing the gallery note that there is a “view full size” option you can click on. 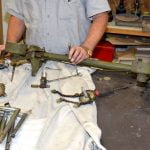 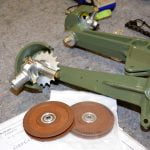 All parts reconditioned, made new or replaced with new. 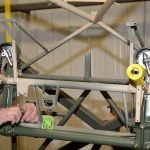 All fresh, the control columns getting installed. 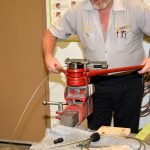 All new stainless control cables being swaged and tested. 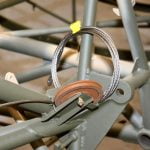 New cables, pulleys and hardware throughout. 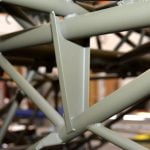 All of the bulkheads have been installed and we are currently fitting all new stringers. Concurrently there has been a vast amount of work on the wings. Aside from detailed inspection, the wings have been; blasted, recoated, some minor rib repairs made, new aluminum pieces made for the leading edges and control surface”wells”, new trailing edges made, air intakes added for cockpit ventilation, and control surface fit check and reassembly. The control surfaces have also received the same treatment.  This is a big airplane. As you have seen in our previous posts about working on Gullwing Stinsons the wings are monstrous. The following gallery has photos of the fuselage stringer cage build up and wing work. You may notice the appearance of some tubing being painted tan in the cockpit area. That structure will be slightly exposed in the interior and the tan color will complement the interior. 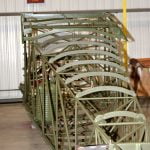 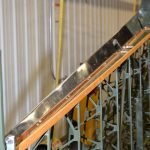 New aluminum and wood for the aileron cove. 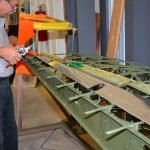 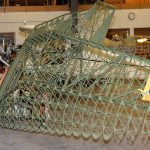 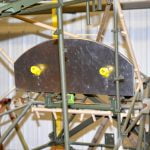 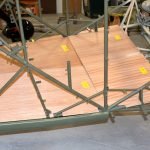 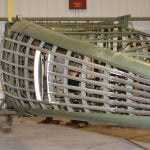 New Stringers being fit and installed. 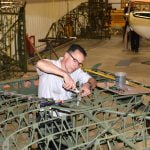 Wings are completely gone through. 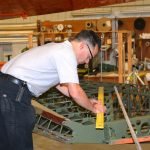 To date the wings are complete and ready for cover. The fuselage is continuing build up and we anticipate cover work to begin by years end. This is an exciting build. The massive “Gullwing” is a beautiful airplane that handles in the air better than it looks. We are particularly fond of this breed because it traces back to our roots as a family and company. Our founder’s first restoration was a Gullwing, see the “Four Time Grand Champ” article from 1982 in our press release section. This “Super-77” will be the fifth complete restoration of a Gullwing by RARE Aircraft. Thank you for checking in. We will be sure to share more about this build in the near future as it progresses.