In the Waco world, the F-2 is in a league of its own. This affectionately revered Waco has delighted pilots for 7 decades and is arguably the quintessential Waco experience.

The F-2 is quite simple, yet elegant in its operation and appearance. It is quick off and onto the runway with no prolonged rollouts, where most incidents occur, and there is a light, balanced feel to the controls in all modes of flight.

The extreme rarity of this model, coupled with its legendary performance, makes it a perfect fit for the description…”Rare and Desirable”.

The Waco slogan was “Ask any pilot”. Ask anyone that has flown an F-2 and you’ll hear a description that could be mistaken for a schoolboy love affair!

This aircraft is one of our 2001 restorations, and has been flown only 125 hours since completion. It was first shown at Sun ’n Fun 2001, where it received the Reserve Grand Champion award. It has since received accolades wherever it has been shown. The restoration was total and complete. A brief synopsis of the history and restoration:

Waco QCF s/n 3493 was certified for service by the factory on June 13, 1931. It had been commissioned by Mr. Ridelle Gregory of  Kansas City, and records show that it was delivered to him at the factory on that date.

Note that the registration number on completion was N-11442. Upon acquiring title to the aircraft in 1990, the restorers found that this number was assigned to a Cessna 150. Ten years of attempts to obtain this original number, up to and including purchase of the Cessna from its owner, met with failure. A similar number, N-11424, also originally assigned to a Waco, was reserved and assigned to the airplane in year 2000.

The aircraft was purchased from noted Waco historian Marion “Curly” Havelaar in 1990, along with a small handful of original parts. Mr. Havelaar had procured the aircraft from the son of the original owner, also named Ridelle Gregory.

The airframe has literally been remanufactured to new, but original, standards. Original parts were used wherever possible, and what had to be fabricated was done precisely to original Waco factory prints.

The spirit of the restoration has been to keep the appearance of the airplane as a sincere representation of its 1931 persona…while also bringing it operationally into the new millenium. In order to display the 1931 originality (reference the original Waco Sales Record)…

It was intended that this airplane, while it displays its 1931 personality, be as operational and serviceable as possible. Its owners did commission it for active service, and it will in fact be a working airplane. With this in mind there has been installed…

The FAA inspected the aircraft for airworthiness and conformity to the original Type Certificate (ATC 416) and awarded a new Standard Airworthiness Certificate on March 20, 2001. It was test flown and returned to service on March 23, 2001. 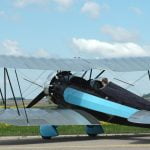 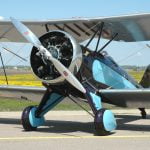 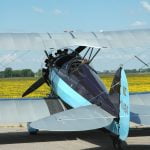 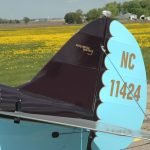 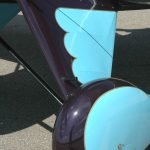