Waco NC-15700 was one of two model YPFs built by Waco Aircraft Company. From the dates it appears that these two, serial numbers 4374 & 4375 were built concurrently. These were the first of the “new” style “F” models, commonly exemplified by the later and more numerous UPF-7. The design exhibits several advances over the previous F series, notably:

The natural question arises today regarding similarities to the more common and prolific UPF-7. On the surface it appears that it is a UPF-7 with a canopy and a bump cowl. Since NC-15700 was the prototype, this is a natural conclusion. But “there’s more to the story”:

And, of course, the Bump Cowl.  This aircraft was the last production Waco with a factory installed bump cowl. Subsequent YPFs and ZPFs all had the later design smooth cowls, concurrent with the Waco Cabins of the time. The original cowl was with the project when acquired, but a new one was replicated by D & D Classic Restorations, Covington, Ohio.

Waco NC15700 was delivered new to its original owner, Miss Connie E. Johnston, on November 5, 1935. Having been special ordered by Miss Johnston, it was fitted with the most deluxe equipment available at the time, and finished in a most opulent manner, all to her specific requests. Waco’s Engineering Dep’t Airplane Order (enclosed) documents the detail and scope of Ms. Johnston’s order. Some specifics:

The project airplane was quite complete, but in a substantially disassembled state when it arrived. Further disassembly down to individual parts was accomplished. Some repair was necessary to the fuselage account wear points, but it was essentially a usable assembly. The gear attach points were removed and new ones welded in which required extensive fixturing.
A complete new wing set was built using all new parts and materials. The extensive wood fairing stringers and formers were all replaced with new. New fuel and oil tanks were fabricated. The empennage was reconstructed using new wood parts.

The landing gear was completely rebuilt using newly manufactured internals. The brace strut system was all reconstructed with new parts and materials. The tailwheel system was remanufactured as well.

New interplane struts and center section struts were fabricated and chrome plated as called out in the original factory order.

The numerous fairings were usable as patterns and all new sheet metal was fabricated. The coupe top structure and windshield were remanufactured using some original parts and factory drawings.

A new engine cowl was fabricated using the original cowl as a pattern. The cowl was beautifully reproduced by D & D Classic Restorations. The original latching hardware was refurbished and reused. 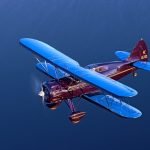 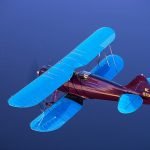 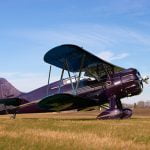 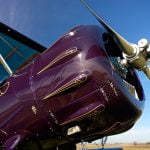 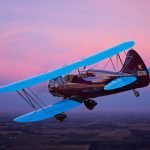 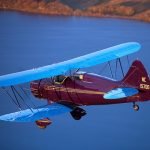